Here is an expression called “Council of Being”, about knowing within and without and neither within nor without in a dynamic and moving way. The light in the center of the void has a pull and curious illumination. The black and white coloring represents the dualistic universe of expression we often live with. The monochromatic nature of this picture made the piece especially meditative because there was little color selection, making the process continuous as I worked my way around a spiral.

The beads appear alive with the movement of entering each bead on the in-breath, and on the out-breath pulling the thread out the other end. I enjoy this process, it is one of the most pleasant processes and my favorite art form. Since each bead is tiny, about one millimeter, concentration needs to be steady in picking up each one and sewing it down one or two at a time. Each bead is a void, and not a void, and neither a void or not a void. I reflected on this piece during the recent eclipse and thought I would share it with you. I also made a maple frame for the piece as the maple seemed right for its plain expression. 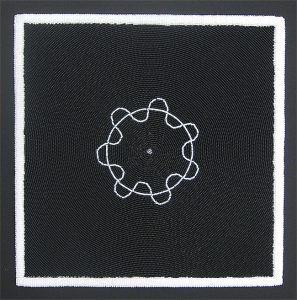 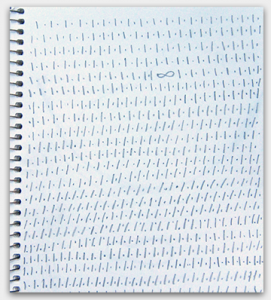 If I Could Paint a Picture

If I could paint a picture

I would paint it –

Instead of sitting here and seeing all the different ways to paint it.

If I could paint a picture you would see a sister saying to me that I am not an artist because no one buys my pictures.

If I could paint a canvas it would involve a flash animation of infinite variation, with sound and light displaying and tweening each sequence with splashes of vigorous Knowing.

If I could paint a picture you’d be in it, and then again, and again because now you‘ve

If I could paint a picture I’d like to show you the mirror in your heart in each cellular division and transmutation lifting you out of any idea of the picture.

If I could paint a picture of myself the canvas would not be big enough nor small enough, it would be a burning canvas with a paint called no-thing.

If I could paint a picture, you’d see your pain and want to touch it with love and devotion. You’d caress your sore selves and see them heal in disappearing wonder.

How Big Is Your Community?

When I found Alanon, it became my whole life, going to meetings and working the steps became second nature to me. It included a way of being and operating in life that made sense, was moral, and allowed for all things to be included in it. So, my whole world was Alanon, then whatever happened, happened in Alanon. What I see happening with others around me is that they see “their” world. What “they” have to do, what “their” family is like, and what “they” think, and then they try to squeeze Alanon into that.

Alanon, or sangha or community or This way of walking is too big to squeeze into a myopic way of seeing the world.

I have some friends in Alanon and I’d usually ask if we could get together over the holidays, but was told by each of them that they are just too busy, things are too hectic and stressful. They have family obligations and such things, and this told me that Alanon still isn’t big enough, it still isn’t a big enough umbrella to support doing things in a different way.

I realized this year that this has been an annual occurrence. However, this past year, early in the holiday season, a different group of friends invited me to get together to support one another in the hardships that we each experience during the holidays. Wow! It was so refreshing to be with others that felt that being in Alanon DURING the holidays would give them the strength they needed to be with and support their families. They needed to put out that umbrella first.

I found that I had to allow Alanon to get so big that my entire life could fit into it. I thought for a long time that I had to squeeze Alanon into my busy life, but Alanon is bigger than that. Alanon has room for anything. I have found that there really isn’t any need to compartmentalize life to such a degree that spirituality is over here and family is over there. It is all spirituality.

If someone told me this years ago I might think I have to “make a bigger commitment” and that seems heavy because it feels like then you have to go on a diet or something. All I’m suggesting is to ask yourself if there is any stress in working the program the way you are doing it. Can you see that your life is IN God every minute and in every step? Trying to isolate yourself from Alanon (or sangha or community) will create tension because running around, trying to please, keep things together, and orchestrate special events all alone creates an ongoing havoc and strain.

Some old friends say, “Well, I’m glad you see that there are different ways to work a program and you have your way and I have my way.” That’s true! What do I know? For all I know their unwillingness to come together during the holidays is their process of expansion. I don’t know. It isn’t my business.

My experience tells me that we can see that it is already being taken care of, we are being cared for in God, as a child of God, there is no need to worry about anything, we can lighten up by being IN the program and letting the program grow in us. So in one sense it is all okay, but on another level there is a conscious shift that may need to happen.

So, how big is your sangha, your home group, your family, your community?

I’m so grateful that when I started to go to a meditation center and start meditating there, (and they have all these rituals and all), my sangha felt very large. That way when they did things that didn’t work well with what I needed to do in order to live in balance, I could see that AND continue to walk in the shoes that I had to walk in, and do the things I had to do. They had a program for study and it didn’t work with being a mom and doing what I needed to do at home, so I was able to go to the center and let go of the regimen that they advocated for practice and work out my own schedule and way of being because what I saw felt VERY BIG, and therefore more flexible.

And, when times got tough, that was a reason to go to meetings (meditation center for silence, retreats, or Alanon groups) more often, and speak with people that were available.

When someone says something is coming up and it’s going to be a tough time, and then, they go on to eliminate the sangha or community from the process: my experience has shown me that this is a sure way to suffer.

And, I know even still, that suffering will also lead, in time, to more suffering and eventually bring one closer to realizing that which is always available and being shown all along. So, it’s not all bad. It’s all good in an underlying way, because whatever you do or wherever you are–you are IN. It is bigger than most realize; so why not allow your way of being to widen now instead of later? Why not embrace the world as your community?